Rhonda was diagnosed with an acute case of Retinitis Pigmentosa affecting her since birth. She attended public school through the 5th grade with much difficulty and was then transferred to the Oklahoma School for the Blind in Muskogee where she graduated in 1977. With skilled teachers at OSB, she was able to graduate a year early and even attended the Indian Capital Technology Center in Muskogee acquiring secretarial skills. Rhonda attended college at Northeastern State University for 4 semesters with the help of DRS. She married at the end of this time and she and her husband were concerned that living in a rural area she would have little opportunity for employment.

After raising her son, she attended Central State Massage Academy but soon realized that she could not make enough money to help make a living for her family. In 2005 she contacted DRS to enroll in the Oklahoma Business Enterprise Program (BEP) after visiting with a former classmate of hers who was currently working in the program.

Rhonda was awarded her first facility in 2006 after completing her training. Her facility consists of servicing the vending machines for the staff and visitors at Oklahoma State Penitentiary, Jackie Brannon Correctional Center, Pittsburg County Courthouse, Sallisaw DHS, Sallisaw Tourist Center and Talihina Veterans Center Canteen. She also managed the Tulsa County Courthouse for almost three years at the same time.

The BEP has the federal and state authority to operate facilities in federal, state and county buildings servicing vending machines, snack bars and dining facilities. Rhonda believes that BEP is not just a wonderful way to be employed but self-employed. She pays federal, state, county and local taxes. She has employed up to 7 employees with her guide dog, Pax, in charge of public relations. Rhonda is thankful for the opportunity that BEP gives her to be able to be a productive citizen as a small businesswoman. 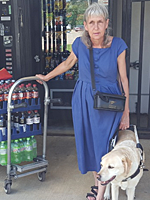