Jason worked in the oilfield for 30 years and was laid off. At that point he put in an application for unemployment, which didn’t pay as much as he wanted. He worked odd jobs here and there and put an application in at ODOT. After his interview with ODOT, he received a call for him to come in and work because of his experience. He was so excited, but one thing still remained, he couldn’t hear. So, his friend had heard of Warren Clinic and he went to get his hearing checked out because his new job was suffering. At that time, Dr. Harrison at Warren Clinic – Audiology contacted Kristi at the McAlester office and he began the application process for DRS. The audiology report was sent to Kristi and he ended up getting hearing aids due to his hearing loss. After being in the oilfields for 30 years and not ever using hearing safety protection as they weren’t forced to until 2000, the damage had already been done.

Jason is still working at ODOT and has been for a year and a half. He is an Operator Technician II and is so grateful to DRS for saving his current job and for all of the services. His boss had nothing but good things to say about Jason and he did mention that it is hard to keep anything from him now because he can hear so well.

Jason stated that the barriers that DRS helped him overcome were “getting my 1st pair of hearing aids ever.”

“I am a hard worker, but I just couldn’t hear anything. I am lucky to have an employer that is willing to work with me and my hearing problems so that I could get my hearing aids and I am very grateful to DRS for helping me find what was keeping me from doing my best on the job.”

“I appreciate the help. It’s good that there is help out there for people who need it.” 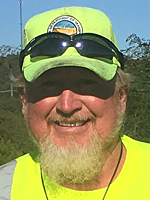