Garret was in his senior year at Norman High School when he started Project SEARCH at the Embassy Suites Hotel in Norman; he went through the interview process in 2015 and was selected as one of the first students to participate in the program. Project SEARCH follows the school year calendar and the students go to the hotel for training and classes as they would High School. During this year Garret learn how to do job applications, practiced the interview process and his soft skills.

The program has four rotations in total and Garrett participated in all of them. After the school year was over, the hotel had some positions available that they wanted to fill with students from Project SEARCH, so Garrett got his resume ready and put all the skills he learned to good use.

He has been working at the Embassy Suites since 2016 as a Banquet Set-Up Assistant, a job he likes and does for 25 hours each week. Part of his responsibilities include flipping the rooms depending on the conference or activity scheduled at the hotel. This includes setting up the tables, chairs, silverware and water stations. The conference rooms can hold from 25 to 1000 people at once, so the workload varies from week to week, but they are always busy.

Since he started Project SEARCH, Garret has become more independent and mature according to his Mom, so much so that he even got his driver’s license and is giving his coworkers a ride to work.

Garret loves sports and enjoys talking to everyone at the hotel, including the out of state teams that stay at the hotel during the Oklahoma University football season. 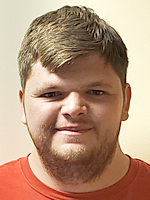 Project SEARCH and employment and retention